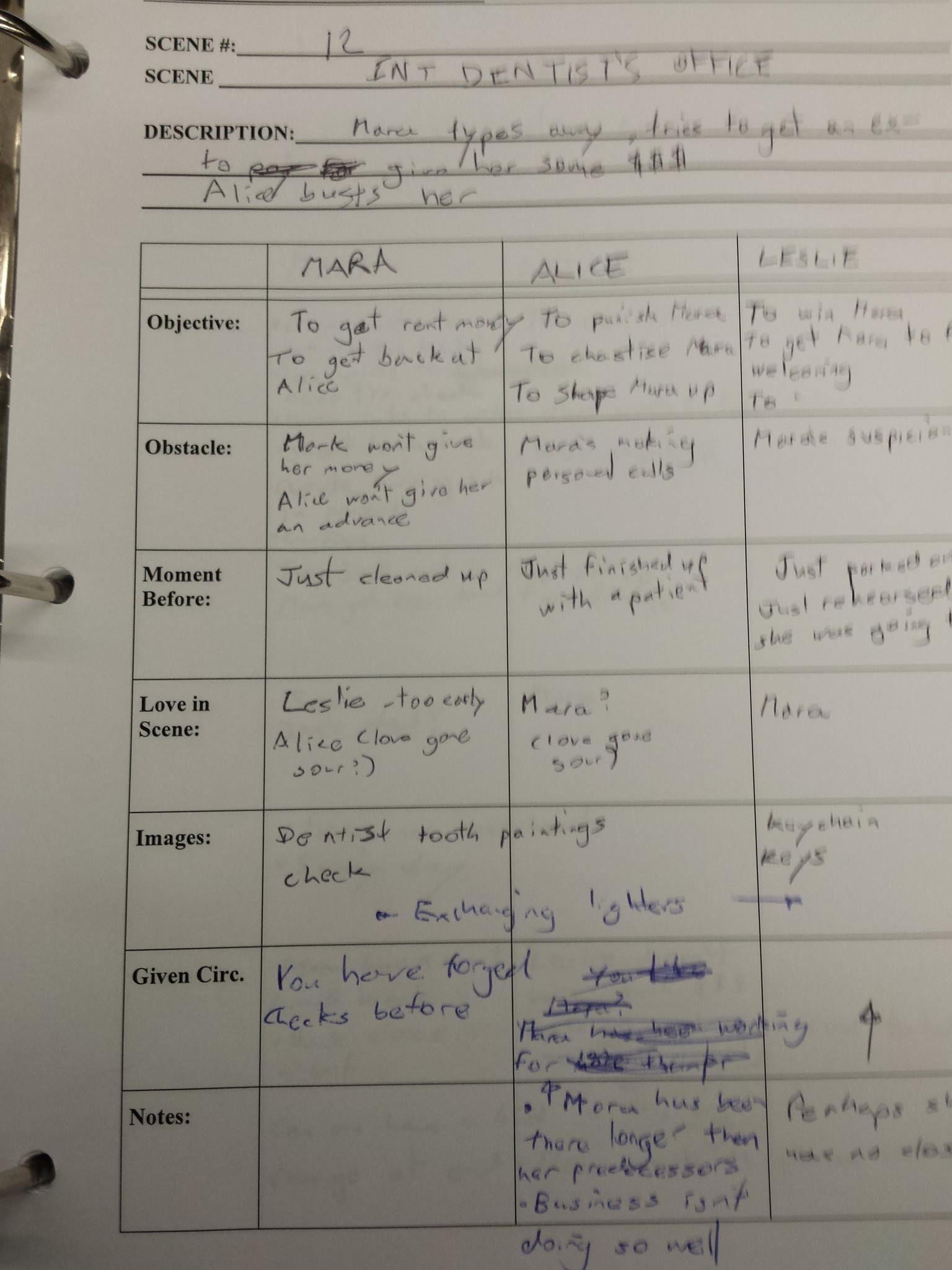 Mild spoilers ahead – for both Bitter Child and Found In Time

The director’s script analysis process probably doesn’t sound like fun, and to some extent, it isn’t. It’s a bit like trying to direct the film, but without the actors, locations, crew, costumes, sound, music, or anything that could possibly ground it in reality. You have to marry the film in your mind – which is a lot less detailed than you think, believe me – to the script on the page, and tease out what the writer meant.

When you’re the writer, it’s just as difficult. I don’t write with an answer to a question. I write to ask the question. Then as the director I figure out what the answer is.

This doesn’t have to be a painful process, however. It is actually full of joy – as you tease apart what the real interaction is between the characters, you’ll see things in a very three-dimensional way. Camera setups will suggest themselves. You will figure out why that line doesn’t work (and why others are just redundant). Most of all, you’ll get to know the characters very well, as though they were your family. One way into the script is to latch onto iconic images – objects in the scenes, or mentioned by the characters in the dialog.

Found In Time’s Chris had an emotional ‘threadline’ that superseded the twisty, ‘timey-whimey’ plotlines. In many ways it boiled down to the choice between accepting his own nature, including the gift/curse of time ‘slippage,’ or trying to suppress it and join the ‘normals.’ Threads became an important visual motif then – Ayana, one of the characters trying to push Chris towards acceptance, spins threads into a tapestry. Jina, who love Chris but is also trying to get him to fit in, mentions ‘threads’ several times. Threading worked its way indirectly into some of the directions I gave the actors, and of course ‘threads’ (costumes) were an important part of the film, conveying the mood and function of the characters.

With Bitter Child, blood and fire keep coming up. Fire, in particular – Mara smokes, picks Leslie’s fire card at one point. She was in a firefight at one point in Iraq. She burns her hands on the sauce. Her family has burned her face off the family photos. A neighbor fires his gun to stop Leslie from chasing Kevin.

Blood is more obvious. People are stabbed and bleed. Mara has nightmares in which her old war wounds open up. But more importantly, the script talks about blood relatives. How they can turn toxic, can create wounds that are as deep in their own way as those sustained during war.

Once I find those iconic images, I dig into them. I look for photographs that center on them. I play word association games. I look for music that resonates with them. Music is especially powerful, since it partially bypasses our rational selves and digs into other parts of our brains. Brody Dalle’s songs are full of pain, and sometimes blood (“Blood in the Gutters”, off her latest album, is pretty good example). Her voice has been described as the sound of a truck running downhill on gravel with the gears stripped.

The music unlocks other things. It brings me back to visual composition. When working with the always awesome Ben Wolf on shotlisting, I feel more loose and relaxed, like I might have a clue as to what I’m trying to say in the scenes. Once you have the analysis and the music in your head, you’re almost halfway there. And once you’ve cast and picked the right crew, you’re nearly 90% there.

Which is good, ’cause the producing side of this is turning out to be more of a slog than I thought. But that’s for another post.